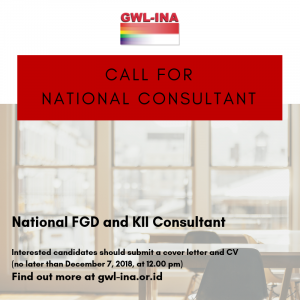 For: Call For National FGD and KII Consultant

Asia is home to perhaps 60% of the world’s trans population, and despite this, relatively little primary research data exists in regard to factors impacting trans people’s access to HIV and other healthcare. Much of the available literature is in the form of UN agency and NGO reports that rely heavily on meetings with activists, and case reports. Even with nearly 10-years of Global Fund involvement and support for HIV and TB, very little information exists on how the transgender community accesses prevention and treatment services. In most cases, transgender women are considered under the men who have sex with men (MSM) or sex workers risk group.

In 2012, UNAIDS listed Indonesia as one of the nine countries in Asia and the Pacific where the number of HIV infections continues to rise (approximately 67,000 new infections per year). In 2013, it was estimated that 640,000 people were living with HIV in Indonesia (representing 1.8% of the global HIV burden). The HIV burden in most provinces is concentrated in “most at risk” populations and is generalized in Papua and West Papua provinces. In 2014, the HIV prevalence rate was estimated at 0.41% among people aged 15-49 years and ranged from 0.1% or less to over 3% between provinces. Approximately 41,000 people received antiretroviral therapy (ART) in 2014, covering only 33% of those eligible for treatment. A 2014 survey showed poor retention on ART (67%).

GWL-INA Network, the Gay, Transgender and Male Sex Men formed Network of Indonesia was formed on February 4, 2007 to respond the needs of community- based organizations of gay and Waria (Indonesian term for transgender women) to strengthen the network and undertake advocacy work to increase the HIV response for Gay, Waria (Transwomen) and other men who have sex with men (GWL). In addition, GWL-INA also aspire to increase the capacity of its members to be actively involved in the HIV response for GWL communities and individuals to realize a healthy and prosperous without stigma and discrimination by health and welfare approaches as well as sexual and reproductive rights.

The Asia Pacific Transgender Network (APTN) project, Key Population Research and Advocacy (KPRA) project, is funded through a Global Fund regional grant awarded to Save the Children, Nepal. The KPRA is multi-country, multi-phase, and mixed-methods research study, examining barriers to HIV and other healthcare access in a four countries— including Indonesia. The research will take place over the next two months and will involve Focus Group Discussions (FGDs) and Community-based Survey.

Scope of Work and Tasks: